It has been an eventful for the citizen media scene in Madagascar. The blogosphere in Madagascar has been growing slowly but steadily the past decade, slightly struggling to find its voice until the 2009 political crisis [1]. The sudden precipitation of events that provoked high demand for frequent updates provided a unique set up for the budding blogosphere to assert their potential, despite the evident challenges.
The past events have been thoroughly documented so let us focus on the consequence of the crisis on citizen journalists and conversely the impact of citizen media on the evolution of the crisis. (Bar camp on reporting in times of crisis in Antananarivo. Photo credit: Ariniaina )

Although Madagascar is now theoretically connected to the high bandwidth fibre optic cables EASSy and LION [3], most of the country still have limited access to internet both because of lack of infrastructure and high costs of broadband internet (only 1.5% of the population used internet in 2009). Therefore, internet won't be able to fulfill the role of democratizing information/communication until access is available to more Malagasies. Still, it is undeniable that the use of online media tools has dramatically increased among urban citizens, specifically during the 2009 political crisis. Bloggers from many parts of the country ( Antananarivo, Toamasina and Mahajanga) have volunteered the statistics of their blogs since 2008 to evaluate the evolution of readership. The timeline of the number of readers can be seen below: 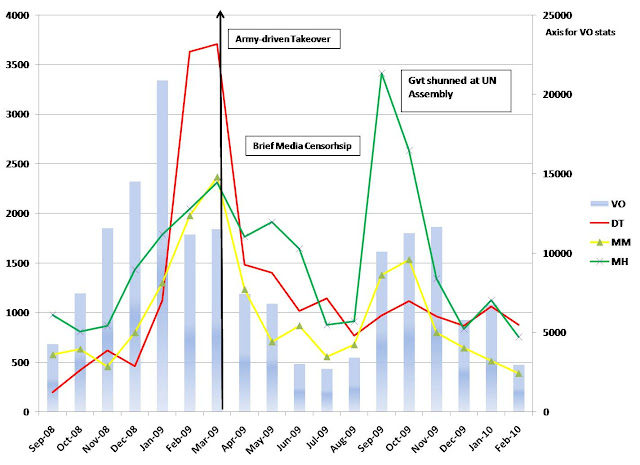 As shown on the charts, even though readership varies significantly between blogs, trends have been strikingly similar even though the blogs were written in different languages. Two traffic peaks can be seen around February-April 2009 when the coup occurred, followed by a sudden decrease that is probably related to uncertainty over potential consequences of writing blog posts. Readership came back when the legitimacy of the regime was questioned by the international community when the Malagasy government was shunned from speaking at the UN General Assembly. It must also be noted that writing during the height of the crisis took a toll on many bloggers who may have fatigued from the toll of trying to inform frequently.

Support from the News Media:

A critical development for the evolution of blogs in Madagascar were the recognition and support by international news media through mention and links:
BBC [5], CNN [6], Global Post [7], France 24 [7], IRIN News [8], Le Monde [9], The New York Times [10] and The Wall Street Journal [11].
The accrued interest fostered emulation amongst bloggers but also reiterated to them the need for their contributions.

While users in the western world ponder deactivating facebook accounts over privacy concerns, Malagasy citizens have joined massively, from 1,100 in 2007 to almost 9,000 users today. Six Malagasy political parties have now joined facebook because they recognized the platform as an important mean to reach constituents, a satirical Facebook page, MDRM ( aplay on word on a political party and LOL in French) was set up making fun of the sudden adoption of facebook by politicians. The discussion on facebook for Malagasies seems to be facilitated because of the perceived authenticity of your interlocutor.

Impact on the political and social crisis :


As mentioned earlier, citizen media fulfilled two needs during the crisis: 1) demand for rapid information and frequent updates from different locations and 2) facilitating distribution of information by being decentralized and rapid translation in many languages. Their impact has been the most saliant on two issues:

More than a hundred people were direct casualties of this ongoing crisis. There were many reports of torture and arbitrary arrests [14] as well. The initial signal that such events were occurring were made possible because of
personal blogs and text messages platform like Ushahidi [15]. Consequently, local human rights monitoring programmes [16] (fr) were launched in Madagascar, Amnesty International investigated [17] and published an extensive report in February 2010. The International Community [18] also denounced the violations [19].

Brief media censorship was a major component of the violations. Blogs became an alternative for news until some were shut down as well. These attacks on the media were reported on the Comittee for Protection of Journalists (CPJ), Reporter sans Frontieres and Global Voices Advocacy. As a result, a media consortium over the role of journalists during political crisis was created and a code of communication is being established.

The reporting of the rosewood illegal trafficking [20](worth several million of US dollars) and ensuing pillage of Madagascar National Park is a good indicator of the potential of citizen media to produce change.
Reports [21], photographs [22] and interactive maps [23] (Google Maps) of the rosewood logging and deforestation were conducted by conservation organizations (Wild Madagscar [24], Global Witness and EIA [25]) and were further amplified [26]and translated by citizen journalists [27]. The online petition [28]to get international companies to stop participating in the trafficking gathered about to 580,000 signatures. The US Senate passed a bill [29] banning all rosewood products from Madagascar and finally the Malagasy Government finally produces a bill that stop further export of rosewood. Whether the ban is actually implemented is very much still in doubt.

Just like in the Rosewood case, the final verdict on the real impact of citizen media is still up in the air. As discussed previously, citizen media often provided the initial hint that some events were worth looking into. By illustrating various abuses during the crisis, citizen media were able to keep political leaders in check with respect to extending signs of budding authoritarism. Coupled with the need to reassure the international community over the legitimacy of their leadership, the administration was mindful of portraying an image of a regime neglecting basic human rights.

However, citizen media activities are often performed as an aside to their day-to-day work by individuals, which prevents bloggers from conducting in depth investigative works, especially in time of crisis. Therefore, a collaborations with professional news media or advocacy organisations is the optimal way for citizen media to provide a meaningful impact.

Another concern for many Malagasy bloggers was the direction that online communication/discourse [30] were taking. Is the level of information overload and sometimes polarized discourse that are permeating the online developed world desirable for a still maturing digital community? Many bloggers have expressed being weary of the excessively politicized turn of the Malagasy web, wishing that the focus be turned back on developing the country, regardless of the composition of the current administration.

Citizen media is evidently at a crossroad in Madagascar; bloggers are seeing the potentials for development but also the pitfalls of the ever-increasing world of rapid information. The good news is that they realize that they can play an active role in shaping both the online and offline world. The hope is that the increased level of civic engagement will not go to waste because of the neverending crisis.

This article is part of the presentation at the Global Voices Summit [31] on citizen media rising session [32].

Grateful appreciation to the following bloggers for contributing thoughts to this report: Currently the editor of the Francophone region for Global Voices, I am a researcher in biomedical engineering for low-cost mobile diagnostic tools in resource limited settings. Raised in Madagascar, I have a strong interest in international development and digital media as a tool to promote social change and transparency in the developing world. I am currently attending the Woodrow Wilson School of International Affairs and Public Policy at Princeton U to further that specific interest. I am also part of the core team of the Foko , an NGO driven to promote the online exposure of social grassroots projects based in Madagascar. I can also be found at twitter.com/lrakoto and on my personal blog.